Two-year-olds are special. Trust me, it won’t be long and they’ll be six and you’ll be wishing you could still fold them up in your arms and carrying them around when life gets hard. As much as this time is challenging, it is also joyful. Connect to their heart, listen to their soul, and the “terrible” twos won’t seem terrible at all.

7 Tips For Parenting Your Two-Year-old

Two-year-olds aren’t quite capable of thinking through that saying the word makes you upset, they will only think about your immediate reaction. Which is different to how you normally act. So, they will say that word over and over because your reaction is so interesting.

2. Surprise them with the Unexpected

Trying “sneezing” with a hat on and have it fly off of your head.

Anything unexpected will delight your two-year-old and again, it’s how they learn, so you are laying the foundation for a good sense of humor.

3. Tell Them What They Can Do

For the entire year that your child is two, or three for that matter, perhaps even when they are four, forget the word: don’t.

Using positive language helps to direct or redirect their behavior — gives them an action to comply with, something to do, rather than having to stop a behavior or inhibit an impulse. 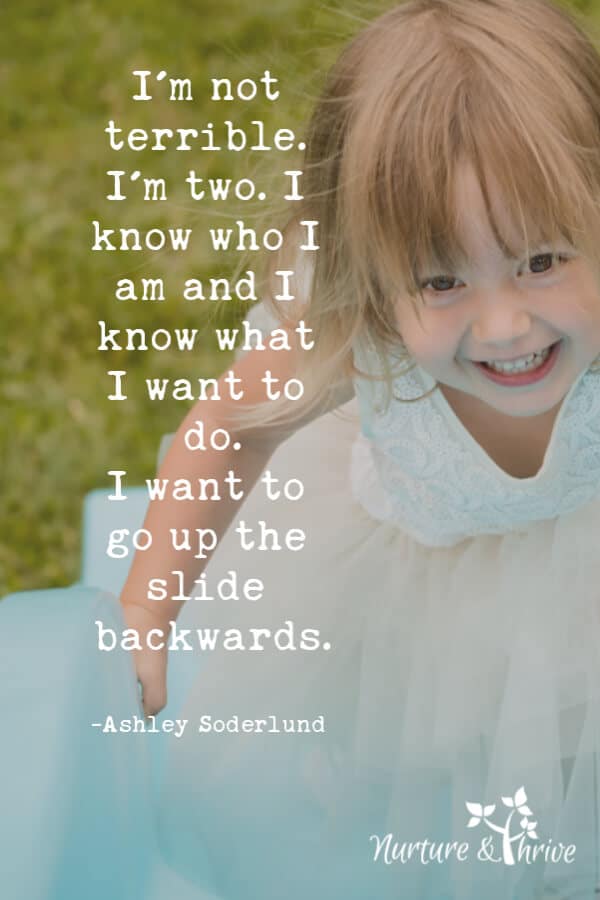 Whatever it is you need to do, have them be a part of it. Put them in charge of the garage door opener when you need to leave the house. Or, at the grocery store, have them point to the items that you need, Can you find the bananas?

Describe the chores in ways that tell a story and you will capture their attention and cooperation!

Instead of asking your child to put on their shoes — which involves a few steps, break it down.

First Get the Shoes: Let’s hop like a bunny to the shoes!

Encourage them to want to put on their shoes: Which shoes will you choose today? The orange ones or the blue ones?

If they refuse, do something surprising — Okay, I’ll put the shoe on — where does it go? Here on your hand.

6. Name and Acknowledge Their Emotions

Two-year-olds are learning what emotions are and they are expressing them in primal ways, not in socially accepted ways. It is important to teach them that what to call their emotions and that emotion are always okay.

Having some predictability in their life will help them have a sense of control and lead to fewer tantrums. I don’t like to have a rigid routine, but having some anchor points that they can count on can go far in reducing transition-time tantrums.

A two-year-old’s newfound sense of independence and self-hood make them primed to challenge rules.

And test and challenge they will.

For more information, visit this BLOG.

Let you loved ones know this too.